Michael David McCready is an American musician and is one of the two guitarists of Pearl Jam, also being one of the founding members. Mike is well known for his brilliant and creative solos since the beginning of the band in 1991, showing a wide range of guitar jams. He participated in the social and cultural movement commercially known as grunge, participating on bands like Temple of the Dog, Mad Season and eventually Pearl Jam. Charismatic and positive, Mike has always absorbed the band in a way of growing himself. The talented solos he performs are a remarkable influence of success guitarists, just like Jimi Hendrix, and he rarely repeats one more than two times. The fans have a special affection with McCready for him being always educated, prudent and interactive within the shows, always talking and throwing picks to the crowd.

Temple of the Dog[] 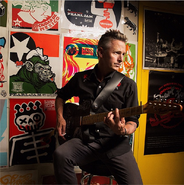